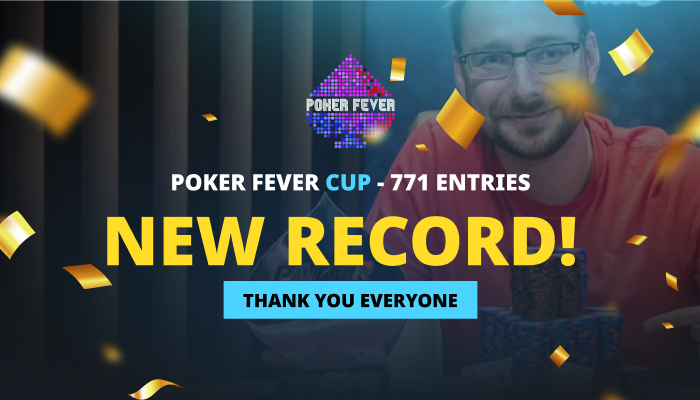 Poker Fever Cup has finally returned to the Go4games Casino Hodolany in Olomouc and hundreds of players showed up to compete in the first festival in eight months. The June edition of CZK 2,500 Main Event ended up setting a new record with 771 entries.

Thursday, June 24, marked the return of the popular Poker Fever Cup festival. The last Poker Fever tournament was played in September of 2020 – exactly eight months ago. Players had a long break from playing for Poker Fever trophies, but finally were able to meet in the Olomouc Go4games Casino Hodolany. Let’s take a look at the results of the two most important tournaments!

Friday’s Poker Fever Mini High Roller was the most expensive tournament of the June Poker Fever Cup festival. 87 players paid the buy-in of CZK 7,500 and there were also 32 re-entries. A total number of 119 entries generated prize pool of CZK 767,500. 13 players were slated to be paid with the winner receiving CZK 197,500 and a trophy.

The first-place prize went to Petr Satek, who after a long heads-up battle managed to eliminate Tadeusz Raczyński. The latter was the best Polish Mini High Roller participant and took home CZK 138,200 for second place.

As expected, the long-awaited Poker Fever Cup Main Event attacted hundreds of players from Poland, Czech Republic and other countries. The CZK 2,500 buy-in tournament had four starting flights – three regular and one which featured shorter blind levels. A total number o 771 entries set a new record for Poker Fever Cup. The final prize pool of CZK 1,657,500 was to be shared among the top 80 spots.

On Sunday, June 27, 115 players came to play in the final day of the tournament. In the end the title of the June Poker Fever Cup Champion, along with the first-place prize of CZK 319,800, were captured by Ondřej Chalcař from Czech Republic.

The next Poker Fever festival is set to take place from July 28 to August 2. Click here to view the schedule.