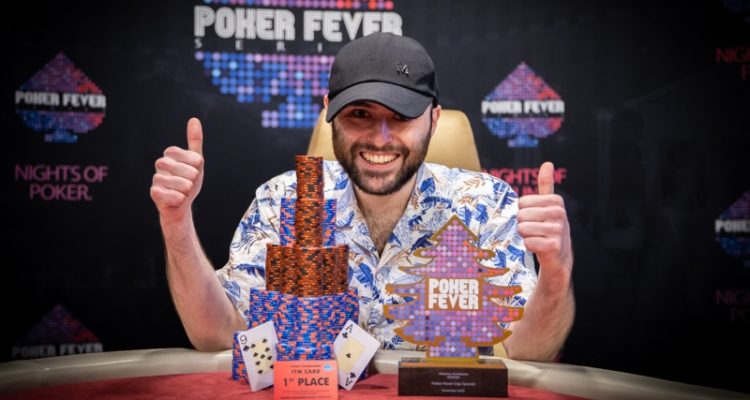 Once again Michał “Warg” Wargin from Poland, a player who apparently has a ultimate license to win at the Go4Games Casino Hodolany in Olomouc, was the last man standing in the Poker Fever CUP (X-mas edition). Let’s quickly recap our recent event.

The entry fee was CZK 1,500. The GTD prize pool was CZK 1,000,000. From the very begining we felt that the large overlay was coming, but the turbo flight saved the day to the point that we came short only of CZK 5,000. This was really good considering that the December festival happened right before Christmas.

After the elimination of the last player from Czechia Petr Mikuláček, the two Poles – Igor Hupalo and Michal Wargin – agreed to a deal and the tournament was over. Michał Wargin was announced the winner of the Poker Fever CUP X-mas edition. He recieved CZK 150.400 and a trophy. The runner-up was Igor Hupalo and he earnd CZK 127.800.

Poker Fever Bounty Masters was the first event where you could win unique christmas tree-shaped trophy. It was a CZK 6,000 buy-in tournament in which half of the entry fee was the bounty for a player elimination.

With added re-entry 40 registrations created the prize pool. There were 6 paid places. Czechia’s Marek Ohnisko defeated the competition and earned himself a decent payout and a trophy. He beat Dominik Jaskulski of Poland in heads-up. Third place finisher was another Pole Seweryn Szwarocki.

In order to participate in Saturday’s Poker Fever Speed ​​Bounty one had to pay CZK 3,000. 1/3rd of the buy-in contributed to the bounty pool the rest was put into regular prize pool. The were total of 27 buy-ins. Four players left the casino with the cash prizes.

It happened that each of these players came from Poland. The tournament was won by Marcel Duda, who cashed CZK 20,800 + bounty. Tomasz Machnicki was ranked second. The third was Bartosz Ferenc.