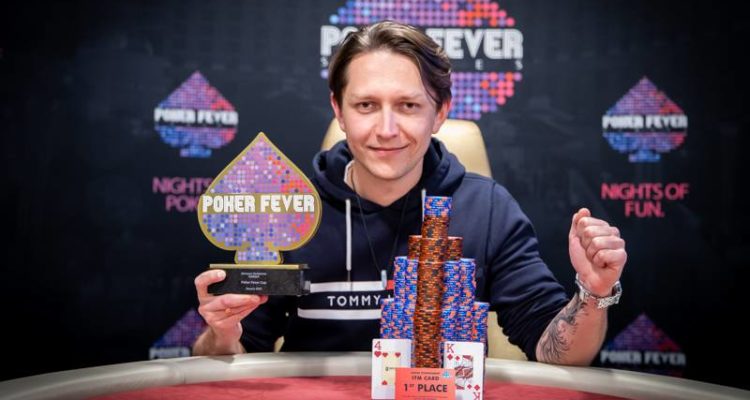 It’s been a very interesting weekend in Go4Games Hodolany. With cards, chips flying, lots of fun and laughter. Let’s meet our winners and make a quick recap of the January’s Poker Fever CUP.

Poker Fever CUP was held from 19th to 22nd of January. It began with the Starter event. On Friday one could participate in the first installment of the Main Event and in the one-day Poker Fever Mini High Roller. On Saturday and on Sunday players focused entirely on the Poker Fever CUP.

138 unique players registered into the Main Event of the Poker Fever CUP. With the addition of 230 re-entries the total number of entries reached 368. 35 players made it to the in the money stage. And the min cash was worth Kc 5.500.

The winner of the January’s Poker Fever CUP was Pole Bartlomiej Basiaga, earning himself Kc 186.800. In heads-up his opponent was Michal Wargin, amazing player from Poland, multiple winner of the Poker Fever major events. This time he scored a 2nd place and got Kc 137.600. The third place finisher was Anton Antonov of Bulgaria. He took home Kc 94.600.

The buy-in for the one day Mini High Roller was worth Kc 7.500. Kc 300.000 was guarranted in the prize pool. It was very eaisly beaten as there were a total of 75 entries bought into this tourney. Eight players finished the competition in the money. Min cash was worth Kc 16.000.

Four Poles and four Czechs made it to the final table. In a heads-up battle Pavel 53 of Czecha defeated Andrzej Powalka of Poland. The last two players agreed on the deal and played only for the trophy. For winning the tournament Pavel 53 earned himself Kc 123.500 and the runner-up was awarded with Kc 115.900. Jaroslav Peter secured himself a third spot and quite a decent payment of Kc 72.600.

The first event of the series was Poker Fever Starter. The buy-in was Kc 1.000 and Kc 100.000 constituted a prize pool. The opening event attracted 44 unique players. With 46 additional re-entries the total prize pool was formed of 90 registrations. The last nine players of the tournament earned some money that night.

The winner of the Starter event was a local player Vladimír Rozsypal. He recieved Kc 28.100. The runner-up Anton Antonov won 17.200 CZK. Petr Vařeka was third. He collected Kc 12.000 from the casino cage.