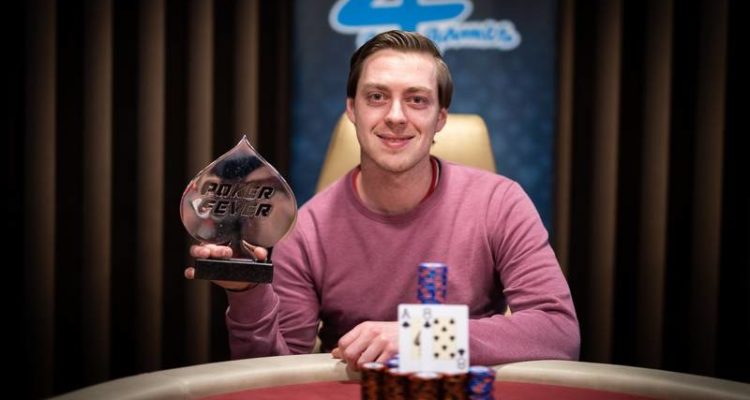 Last Thursday we gathered in the casino Go4Games Hodolany for yet another edition of the Poker Fever CUP. Let’s have a quick look for the summary of this event which ended on Sunday.

Once again we were so glad to see the crowds gathered in the playing hall of the Go4Games Hodolany – this view never gets boring. Prior to the start of the event the Covid-19 restrictions were lifted and it turned out that this decision had a very positive impact on the attendance. This obviously translated into full completion of the guaranteed prize pools which easily exceeded the CZK 1.400.000.

On Thursday the early birds took part in an opening event which was Poker Fever Starter. The buy-in for this event was only CZK 1.000. This tournament attracted 113 registrations which was just about enough to beat the CZK 100.000 guarantee.

The top two spots were taken by the local players. They decided to chop the remaining prize pool into two equal pieces – each of them worth of CZK 21.900. Dušan Gebauer was announced a official winner and Daniel Junec was the runner-up. Karol Bogusz of Poland secured himself a third place and a payout of CZK 13.600.

It was Dominik Wochnik (PL) who defeated his fellow countryman Grzegorz Pokorski in a heads-up encounter and took home CZK 144.600 (after the deal) and a trophy. The “bronze medal” for the Mini High Roller and CZK 81.500 was taken by a local reg Jan Lamper. This event attracted 62 unique players who generated a prize pool of CZK 645.000 (re-entries combined).

There were four starting flights in the Main Event. On Sunday, when the late registration in a turbo flight was over, we counted 529 registrations. Then at 4 p.m. 72 players resumed the tournament in the official Day 2. There were 53 paid spots for grabs with the min cash worth of CZK 4.800 and the CZK 233.900 for the ultimate win.

Jasper Van der Veen of Holland* was the last man standing. He defeated Polish reg Łukasz Sadłoń in a final confrontation and earned himself a hefty payout. The runner-up took home CZK 162.600 and the mysterious “Mole” who was third left the building with CZK 116.000 profit.

* It is worth mentioning that this was the first victory in a Poker Fever event for the player from The Netherlands. Big congratulations to you Jesper!

Thank you all for being the part of the best poker community. We are looking forward to seeing you again during the upcoming Poker Fever events.

The next stop: Poker Fever Series (exact dates yet to be determined, but it will probably be early April).