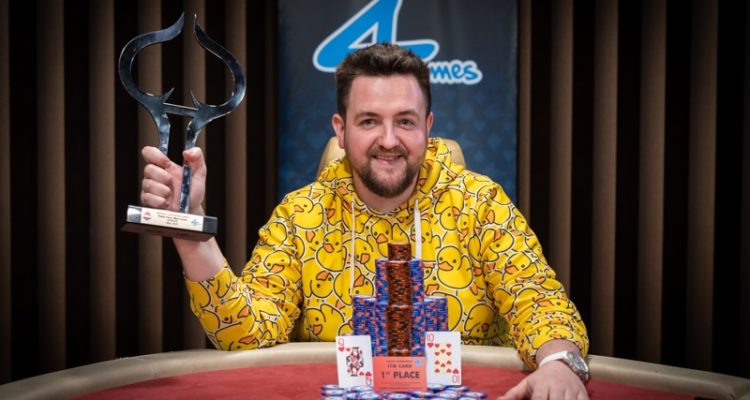 Łukasz Krzyczkowski with the second ME win of his career!

For the second time in his career Łukasz “Krzaku” Krzyczkowski won the Poker Fever Series Main Event. The Pole was the first player in the history who managed to do so. Let’s summarize briefly the last edition of the most popular poker event in Moravia.

As usual the event took place in a beautiful and comfortable Go4Games Casino Hodolany in Olomouc. Festival was held from 18th to 23rd of May 2022.

The buy-in for the Poker Fever Series Main Event was Kč 5,500. Prize pool was created by 614 registrations. 71 players advanced to the ITM stage.

At the end of the tournament three players from Poland put up the fight for victory. Third place went to Janusz Potulny who earned Kč 330,200. After his elimination Andrzej Kulka and Łukasz Krzyczkowski advanced to the heads-up. Both players had different goals: one was aiming at winning the second major trophy of his career, and the other one wanted to earn some additional money. The quick deal was made and Łukasz Krzyczkowski was declared a winner.

The first major of the festival was the Super High Roller, with the buy-in of Kč 30.000. There were 39 total entries which elevated the prize pool to Kč 1,17 mln. 5 players made it to the money.

Top three players are the regulars of the Poker Fever events. Marcin Jaworski of Poland who over the years won at least two second places in SHR, this time captured the third place. He recieved Kč 186.300 for his effort. In heads-up it was Roman Papacek and Jiří Horák for battling it out for over Kč 400.000 and the trophy. Horák was the chip leader and he knew how to put pressure on his opponent. It wasn’t a long battle. In the last hand of the tournament Papacek called an all-in from Horák with 75 and lost to a A7.

The High Roller was the third event of the schedule with the guaranteed prize pool of at least Kč 1.000.000. The buy-in was Kč 15.000. There were 37 unique players that collectively bought 20 re-entries. Unfortunately this time it wasn’t enough to reach the Kč 1M mark.

While 3-handed players agreed to a deal. Roman Papacek who managed to make his second deep run of the series and took the third place and Kč 220.000. Afterwards Jaroslav Peter of Czechia defeated in heads-up Marcin Iskrowicz of Poland and won Kč 233.200 and the trophy.

We invite you to take part in the Poker Fever CUP event that will be held this June. Kč 1.400.000 guaranteed in the tournaments. Cash games and Live casino games available 24/7. For the full schedule please visit – this site.

Online satellites for the Main Event Poker Fever Series are running twice a week on Unibet. For more information please visit this article.