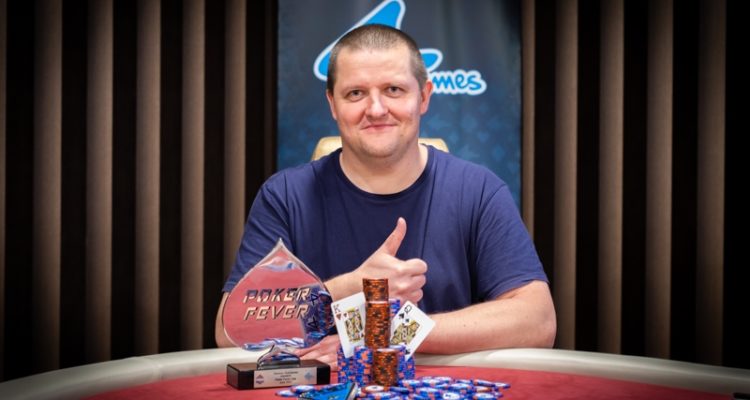 Another Poker Fever CUP in Go4Games Casino Hodolany is in the books. Thank you for participating in June’s edition. We hope you spent a memorable weekend in the beautiful city of Olomouc. Let’s make a quick recap and present to you all the winners.

The buy-in for the Main Event was 2.500 CZK. After four starting flights there was a total of 390 registrations. We missed the guaranteed prize pool of 1.000.000 Kc only by several buy-ins.

In heads-up Piotr Trębacz (featured photo) and Lukasz Główka agreed to take 150.000 Kc each, and they played only for the 11.700 Kc and a trophy. It was Piotr Trębacz who came out of this battle victorious and he earned himself additional money and a title.

Third place finisher was another player from Poland Bartłomiej Dąbrowski. He recieved 91.400 Kc for his efforts.

When the third place finisher Jiří Horák was eliminated the remaing two players decided to make a deal. They both agreed on a 124.500 Kc payday and decided to end the tournament on the spot. The official winner was Kajetan Jantosz of Poland and the runner-up was his fellow countryman Mariusz Masłowski.

The buy-in for this event was 1.000 CZK. There were 62 entries and 55 re-entries. Thanks to the 117 total entries the guaranteed prize pool was reached with a tiny surplus.

In the end there were three Poles battling it up for the first prize worth of 31.400 Kc. The last man standing was Marcin Rarak. In HU he defeated his fellow countryman Szymon Gołębiewski (19.600 Kc). The “bronze medal” was awarded to a third place finisher Patryk Grzymała (14.100 Kc).