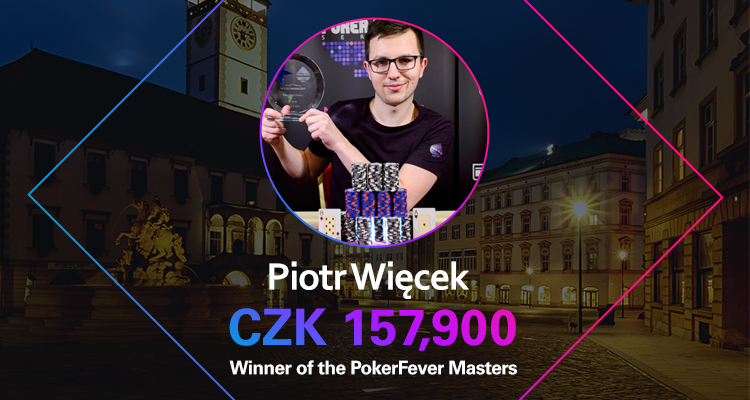 Wednesday 15th March saw the Poker Fever Masters Championship begin with an 8000 CZK buy in, 50k starting stack and a very playable 30minute clock, an event that would allow plenty of play and the chance to show just how good you actually are!

66 players (inc re-entry) played the event and over the course of 2 days would fight it out for the title of Poker Fever Master! With 8 places paid, the min cash would earn just short of 14,000 CZK, stretching to a 1st place prize of almost 158,000 CZK a fantastic prize to play for.

As you would expect from this level of competition, the play was dominated by both Polish and Czech players who took to battle to become champion. This dominaton came to fruition when in the money there was only one Czech player remaining, Marek Dedic. Marek finished a valiant 3rd place for 69,700 CZK after a fantastic days play, but he couldn’t take it all the way and elimiate the rest of the Polish final table.

Heads-up found Polish players Piotr Wiecek and the chip leader from the start of Day 2 Michal Ozimek. Wiecek had such a chip lead that heads up that when Michal pushed with K – 9 he could easilly afford to snap call with A8 and when, as always, the customary 8 on the river decided his victory, handed him the trophy and sent 157,900 CZK into his hands. Michal Ozimek could not have played better and he will be happy non the less to take home a solid 92,900 CZK for his 2nd place finish.