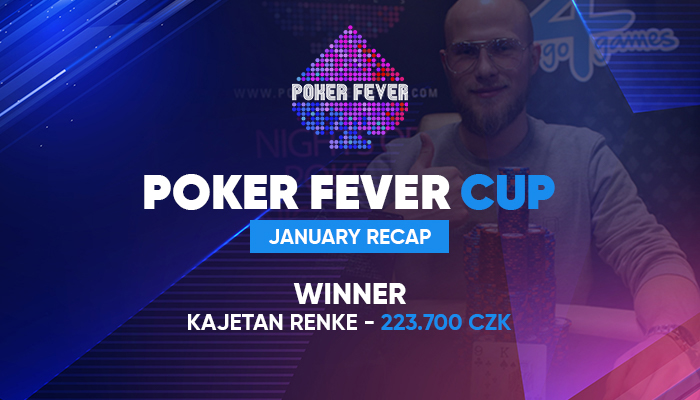 Poker Fever CUP January is over and it’s high time for a recap from the festival. Kajetan Renke (pictured below) won the biggest event during 14th edition of Poker Fever CUP. Polish player proved better in a heads-up defeating Czech player Dušan Kocián, and he cashed CZK 223,700 for his performance.

On the final day 79 players returneed to the tables in Go4games Hodolany. The chip leader was “Milchez”. There were also Damian Stolarek, Maciej Stachniuk and Damian Siewert close to him in chip counts. 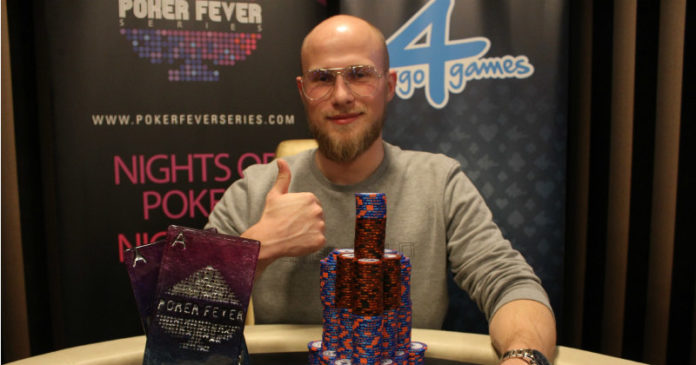 At about 9:30 p.m. 9-handed final table emerged. Five players from Poland and four from the Czech Republic. The first to go was Emil Kaliszewski, who got CZK 27,700. In the next spot we said goodbye to Radovan Krmela, (CZK 37,500).

Then it was time for two more Polish players to hit the rail – Stachniuk (7th place – CZK 49,400) and Jarosław Nowak (6th – CZK 63,700). In the fifth the remaining players eliminated Stanislav Michalec, who cashed CZK 80,300 for his performance. Soon after another player from Czech left the table – it was Petr Kmet (4th place and CZK 100,000).

Third place went over to Siewert who thus got CZK 123,800 richer. Worth noting that this player took second spot in December Mini High Roller at Poker Fever CUP, and was really succesful here in on of the side events.

And so in final heads-up we had Kajetan Renke and Dusan Kocian. Renke showed some skills and won CZK 223,700. Runner-up of the event left the building CZK 158,300 richer.

During the final day of Poker Fever CUP we also had a side Turbo Deepstack event with CZK 1,000 BI. 22 poker players registered and 14 times they decided for a re-entry while cash prizes were to be given out to 5 best.

The tournament ended in a 3-way deal. The winner was Tomasz Hedzielski, who took second spot in another side event one day earlier. Here he received CZK 8,400. Same amounts were collected by the other two players Tau Pan and Michal Zaoral. The remaining two to cash were Maciej Kamiński and Cezary Kiełpiński.

Winners of the Turbo Deepstack: 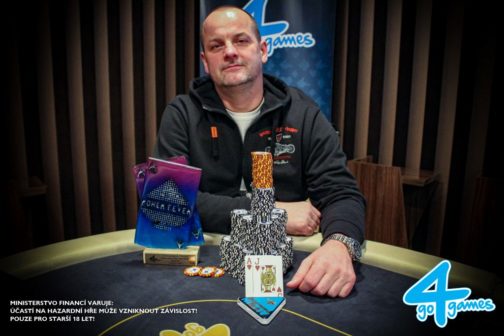 Poker Fever CUP was also revolving around the Mini High Roller. The winner of the most expensive event was Tomas Macek, who won the final heads-up against Grzegorz Reczko.

Mini High Roller with CZK 7,500 was the most expensive event on Poker Fever CUP schedule. In this tournament players started each with 30,000 chips and blinds increased every 25 minutes.

Mini HR event recorded 60 registered players of whom 19 decided to re-enter increasing the total number to 79 registrations. The prize pool went up to CZK 592,500 thanks to that, and best 8 could hope for prizes.

As you may have heard the event was won by Tomas Macek (on the right), who cashed CZK 153,900. In HU he faced one of the best players from Poland, Grzegorz Reczko, who scooped CZK 104,300. CZK 78,200 for the third spot went to participant known from previous PF festivals, Petr Litera.