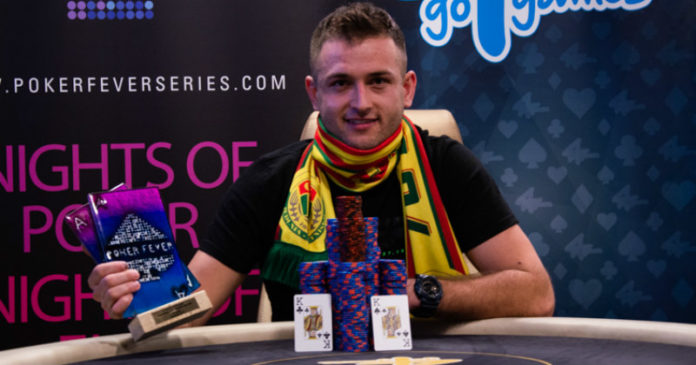 December, 13th edition of our little weekend festival known as Poker Fever CUP is over and it turned out very succesful for Polish poker players. They scored five highest places in the Main Event and the trophy was scooped by Kamil Skowroński, who in result received about CZK 177k.

The main Poker Fever CUP event had a CZK 2,500 buy-in. It began with 4 starting days and a total of 428 registrations and the guaranteed pool was slightly exceeded thanks to which as many as 47 players could hope for prizes.

The final bout started at 4:00 p.m. and after 5 hours we knew the rooster for the final table. Seven Poles and 2 players from the Czech Republic.

Seventh spot went to Józef Gutt, who received CZK 39,500 for his endeavour. Soon after it became clear the trophy was going to Poland. Łukasz Kotwica went all-in with AQ and got called by Petr Litera, who turned over A9. Board was safe for the Polish player and Litera went home CZK 50,800 richer.

CZK 64,000 for the fifth spot went to Krzysztof Sikorski, that interestingly started the final day as chip leader. He lost his last chips when his AQ lost against Kamil Skowroński’s 88.

Buśko finally came 4th winning CZK 79,100. Then Skowroński sent Artur Brandysiewicz (77 vs. AQ) home. The heads-up was to be played between Kotwica and Skowroński.

“Skowron” wins it all

At the very beginning of their duel Skowroński had a lead but Kotwica quickly doubled his stack. Unfortunately it did not win him the trophy. Main Event ended with a hand in which Kotwica’s J6s lost against Skowroński’s kings.

On the last day of the PFC mini-festival we laso had a side event Turbo Deep Stack with CZK 1,000 buy-in. Played by 25 poker enthusiasts of whom 6 decided for a re-entry. 5 best received cash awards for their performance.

The side event was also dominated by Polish players. It was won by Jarosław Chmiel, who scooped CZK 10,800 for his victory. Second spot went to Piotr Majerczyk, who gained CZK 6,500 this way.

Congratulations to the winners and Merry Christmas to all our readers!