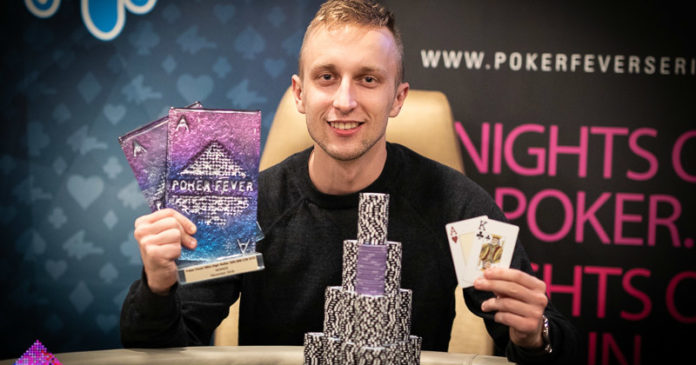 The festival in Olomouc has started well for Polish players! Michał Bróg has won the Mini High Roller at Poker Fever Cup, and thanks to the deal made during the final heads-up he scooped CZK 149,600.

The eight edition of poker mini-festival known as Poker Fever Cup started on Thursday when players could register to the Poker Fever Starter. Event with just CZK 1,000 buy-in and CZK 1,00,000 guaranteed in the prize pool. There were only 92 registrations and due to that we had a bit of an overlay. Finally the tournament was won by Pavel Vicek from the Czech Republic (CZK 18,400).

Participants of the High Roller were competing for 8 places paid and the winner was to win CZK 173,200. Bubble boy of the event turned out to be Alex, a player from the Czech Republic, who got eliminated by Michał Bróg. After this elimination there were 6 Polish players left in the game and two from the Czech Republic.

Soon after also Zbigniew Dołzbłasz was gone after he had moved all-in with A8 and got called by Bróg’s KT. Ten on the flop as well as king on the river and Dołzbłasz had to settle for CZK 68,000.

When the game was 3-handed Marcin Kogut and Michał Bróg had a huge advantage over Martin Hodan. Kogut however lost a huge hand against Bróg in what was a war of the blinds. Michał was holding a pair of sevens and his opponent had AK, but lost the flip. Kogut left the game CZK 87,100 richer.

Bróg had a chip lead over Hodan when the HU started, but the opponent was able to even the stacks and after that players decided for a deal. Bróg guaranteed himself CZK 149,600, and Hodan was to get CZK 137,700. Afterwards the game was continued to see who gets the trophy.

Yesterday we also had the Day 1A of the Poker Fever Cup Main Event. The CZK 2,500 buy-in tournament has 4 elimination days (including 1D Turbo on Sunday). The guaranteed prize pool is set at CZK 1,000,000, but we can expect it to be exceeded. In online satellites alone we have given away 191 entries.

Starting days of the Main Event guarantee that 10% field advances. 15% participants get cash prizes. Yesterday as many as 80 players decided to register and 38 went for a re-entry. Altogether 12 advanced further to Day 2.

Classification of the Main Event after day 1A:

Two more starting days for the Main Event are planned for today and there will also be a side event – the CZK 1,000 Midnight Turbo. You can follow all the action from Olomouc over at Pokertexas.net.

Another edition of Poker Fever Cup in January!

Did you know that the next edition of Poker Fever will kick off January 23rd? Online satellites will start over at PartyPoker on Monday, December 17th. Don’t waste this chance. More details can be found here.