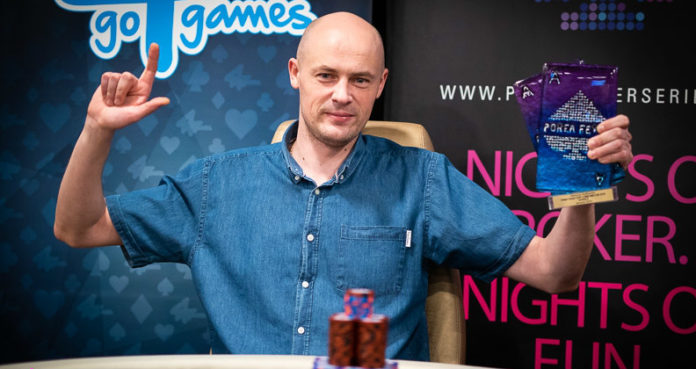 As many as eight players from Poland managed to get to the final, 9-max table of the Poker Fever Cup Main Event. As it turned out the winner of the 9th edition of this tournament is Patryk Chąciak, who cashed CZK 198,400 after a deal made in heads-up.

The first mini-festival known as Poker Fever Cup this year had a CZK 2,500 buy-in and as many as 677 registrations (including 235 re-entries). It means the prize pool exceeded the guaranteed million. 69 best participants advanced to the final day out of four starting flights. Each of them had guaranteed a cash prize already, but 39 could hope for much more.

Polish players dominated the game and they were a majority at the final table as well. The odds at the FT were very good for Poles as there was only one player who could have taken the CZK 222,600 main prize for the Czech Republic.

The last representative of the afore-mentioned country was Kamil Kratky. He eliminated Jarosław Chmiel, thus making him the bubble boy and afterwards he also took last chips from Adrian Siewierz, winning with AK against Adrian’s QQ. “Siwy” took 8th place and scooped CZK 35,200.

Beforehand Wacław Dudek hit the rail after he lost a hand to Grzegorz Charciarek. Nevertheless he won CZK 25,900 for his performance. Seventh spot went to Tomasz Wójcik, who also won CZK 47,700. 6th place and CZK 62,200 got Michał Aleksandrowicz, who also lost his last chips to Charciarek.

Szymon Kłos was on a short stack after that and he moved all-in with QTs, only to be called by Jakub Wojtkielewicz, who was holding AQ. Board did not help Szymon and he had to settle for CZK 80,800.

Th afore-mentioned Wojtkielewicz also eliminated Kratky. Pole c-bet the J95 board and Czech pplayer raised leaving not much behind. His opponent thought for a second and then he went all-in. Kamil called instantly an showed aces. Polish player was holding JT, and guaranteed win on the turn, where he hit another jack.

When there were only three left we knew the cup would go to Poland. Charciarek tried to fight back with A9 but he lost to Patryk “Łysy” Chąciak and his AQ. Charciarek cashed CZK 131,600 and in the HU phase he faced Wojtkielewicz.

Polish duel was ended with a deal. All because Wojtkielewicz had some private matters to attend to and agreed to give his opponent some more cash as well as the cup. Wojtkielewicz thus cashed CZK 190,000 and Chąciak came back to Poland with the trophy and CZK 198,400.

Another big Poker Fever will take place between March 4th and 11th in Go4games Casino in Olomouc. The main event of this festival will have CZK 4,800 buy-in and CZK 5,000,000 guaranteed. Satellites to the ME will be available at PartyPoker.