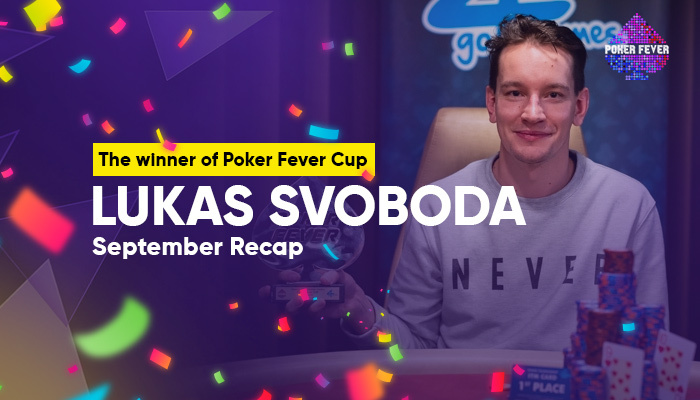 Another stop of the Poker Fever CUP came to a close on Sunday evening. Let’s summarise the highlights and meet the latest winners.

The festival began on September 24th with the Poker Fever Starter event. Buy-in for this tournament was CZK 1,000. There were a total of 126 entries and a prize pool over CZK 1,000,000. 13 players reached the money stage.

The final table was dominated by local players: 8 Czechs and 1 player from Serbia were playing for the win. It all ended with a 3-way deal. Official winner of the tournament was Ladislav Tomášek. Marek Doležel and Milan Svačina were also part of a deal.

On the next day some players sat down to the Main Event, and other players started competing for the win in the one-day High Roller event.

To join the competition one had to pay an entry fee of CZK 7,500. 53 players decided to pay an initial buy-in. Including 31 re-entries, total of 84 registrations were made. This pumped the prize pool up to CZK 541,800.

Nine players made it to the money. This time, the Poles were the most numerous nation on the final table. As it turned out later, this statistical advantage did not help them at all, and the winner of the tournament was Tomáš Macek from the Czech Republic. Before the heads-up he and his fellow countryman Roman Papáček agreed upon a deal and splited the rest of the money almost into two identical halves.

The first stage of the most important tournament of the weekend consisted of four starting flights (CZK 2,500), during which a total of 445 registrations were made. The final day with 71 players returning to the tables was played on Sunday, September 27th. 47 players were officially ITM and the winner was expected to earn a massive CZK 180,200.

Once again the local players confirmed their dominant performance during September’s festival. Two of them made it to the latest stage of the game and conducted yet another deal. The third player involved was Łukasz Smółka of Poland. The official results were as follows:

It is worth mentioning that Petr Litera (CZ) reached the final tables of two major events of this festival: Mini HR and Main Event. Milan Svačina (CZ) managed to reach FT’s in the Poker Fever Starter and Main Event. Big congratulations to both of them.