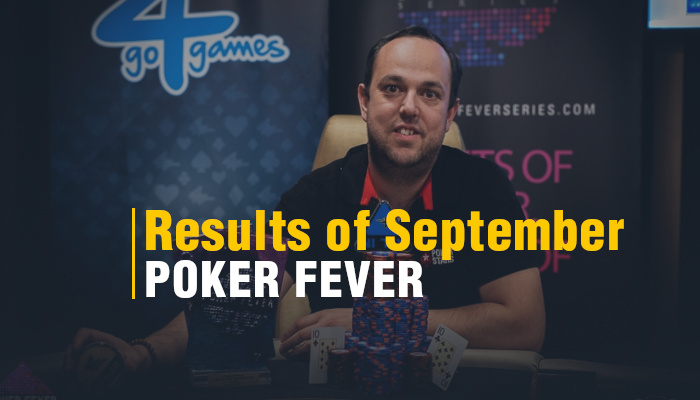 The 12th edition of a mini-festival known as Poker Fever CUP is over. The winner of the Main Event turned out to be Michal Riczak, from the Czech Republic, who won CZK 248,800. Second and third spots were taken by Poles – Krzysztof Jacyk and Michał Ligocki.

Main Event of September Poker Fever CUP had CZK 2,500 buy-in. The tournament started with four starting days which altogether amounted to 600 registrations. Such an attendance meant we had a very nice pool – CZK 1,500,000. Best 55 could hope for prizes and the winner was to scoop CZK 248,800.

On the final day of the ME 80 players came back to the tables. Initially the action was  bit slow, but after the bubble burst it all started for real. The final table emerged in the evening with 4 players from the Czech Republic and 5 from Poland.

It was very close for the FT of Main Event at Poker Fever CUP to include a woman for the first time ever. Natalia Strzałek (pictured below), as she is the one, was playing very well, but she was eliminated in the 12th spot and had to settle for CZK 16,500. In her last hand her aces were cracked by AK held by Adam Kokocki.

Before the final table was set we also said goodbye to Artur Mames (11th place – CZK 22,100) and Miroslav Svoboda (10th place – CZK 22,100). First to leafe the FT was Jarosław Mazur, who cashed CZK 30,700. He was eliminated by Krzysztof Jacyk, who showed kings when his opponent had queens.

Fifth spot went to Michał Wróblewski, who cashed this way CZK 89,100. There were two players from Poland and two from the Czech Republic left in the game at this point. In one of the following hands Pavel Prekop risked his whole stack with A5, that lost against Jacyk’s TT. Polish player became the chip leader while Prekop stood up to go and collect CZK 110,900.

The last Czech Republic representative, Riczak, turned out to be better than his two Polish opponents. First he won with his A3 against K3s held by Michał Ligocki (3rd place – CZK 137,300), and the next hand sent the victory his way. Jacyk had AQ, that his a low board and lost against rival’s TT.

Remember that between 18th and 25th in Olomouc we will be hosting another “big” festival – the popular Poker Fever Series. If you dream about a free ticket to the Main Event then you should try daily freerolls over at PartyPoker that we organize with our partners. The most important PFS event has CZK 4,800 buy-in and guaranteed prize pool worth CZK 5,000,000. What are you waiting for? Try your luck and skills!