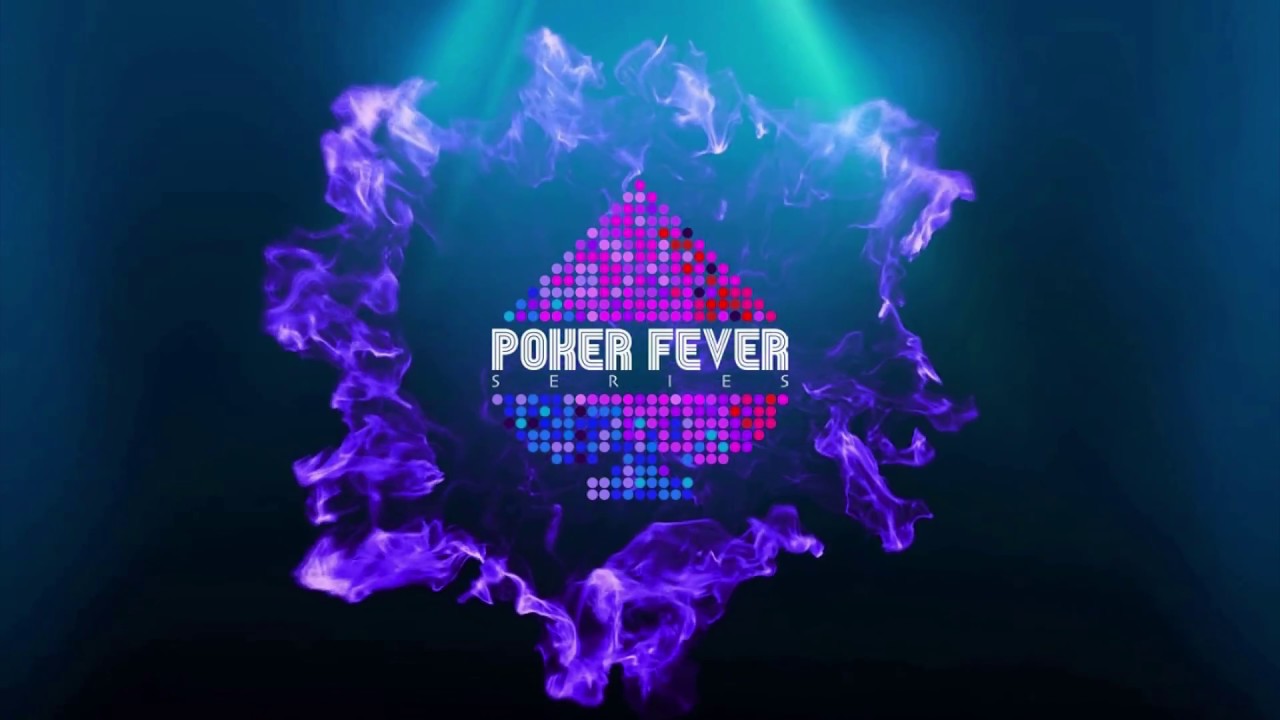 Poker Fever Player of The Year: Fantastic debuts in the TOP10 after July PFS!

The leaderboard for the “Poker Fever Player of The Year” which includes July festival results is ready. Thanks to some great performances by certain players there have been many changes in the Top 10.

July edition of Poker Fever Series is over. Apart from CZK 8,600,000, that was paid out to those lucky enough to cash we have given out some ranking points as well. Let’s see what has changed after 12 events with POY points awarded.

1st Jakub Knapik (-) he maintained the lead in our race, but we have to emphasize it was not the best festival for him. The only points during July Fever for him were those he got for 46th place in Poker Fever CUP.

On the other hand 2nd place holder Roman Papáček (debut), who was in the 15th after last Mini Series got to work. Two great events in July gave him +192.44 points and thus he advanced to 2nd place!

Another czech Republic representative on our list is 3rd Kamil Krátký (⇓1), who lost one spot to Roman Papáček. In July Krátký won points once, for 64th place he took in the ME (38 pts). 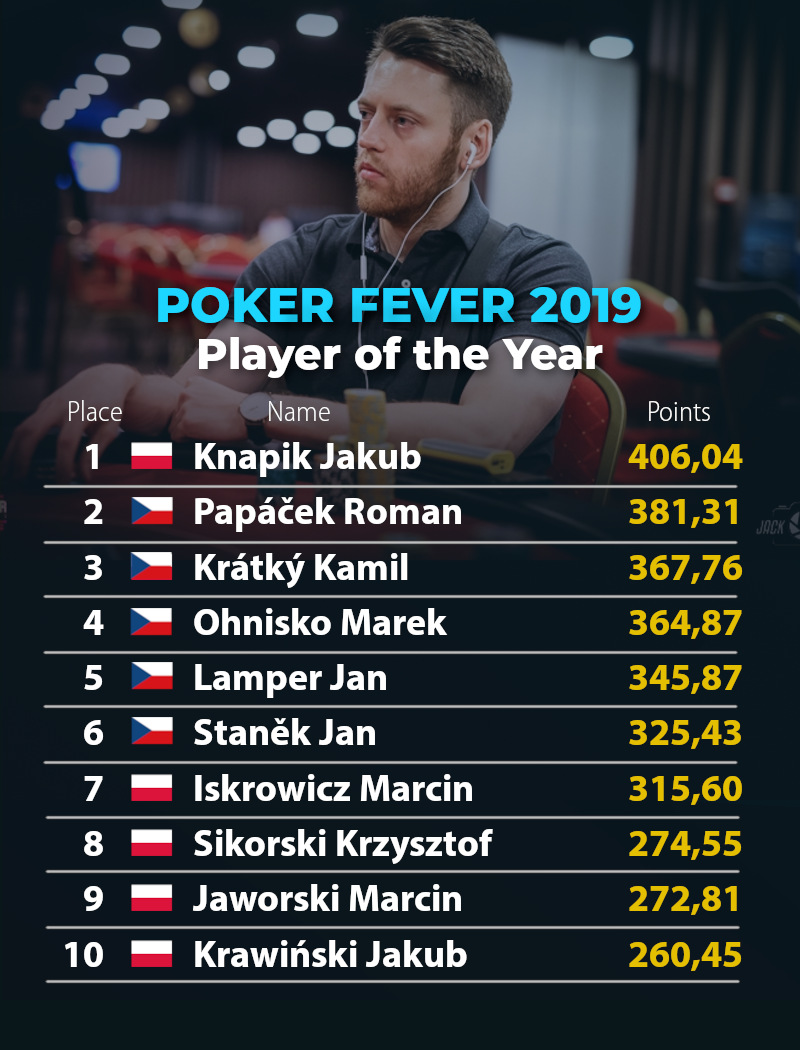 It was kind of a visually funny festival also for 4th Marek Ohnisko (⇑1). We saw him getting up from the table a few times and it was right after he was eliminated. Altogether nevertheless thanks to Mini Masters and Main Event he won 75.96 points and advanced to 4th spot.

Marek Ohnisko moved up thanks to 5th Jan Lamper (⇓1), who lost one spot. Czech player got only 34.69 points this time for 6spot in Masters.

Another debut in the Top 10 is 6th Jan Staněk. Thanks to 4 paid places he jumped from the 15th to 6th place.

7th Marcin Iskrowicz  (⇓4) did not come to the festival and because of that lost 4 spots.

Two places up on the other hand for 8th Krzysztof Sikorski (⇑2). All thanks to good preformance in the Main Event that gave him +58.51 pts.

Third debut on our list for Plyer of The Year is 9th Marcin Jaworski, who was not even in the top 30 beforehand. Heads-up in SHR, 4th spot in HR and 39th place from the Main Event gave this Polish player +237.66 pts.

The list closes up in the 10th Jakub Krawiński (debut), who cashed twice, in the Main Event and PF CUP. 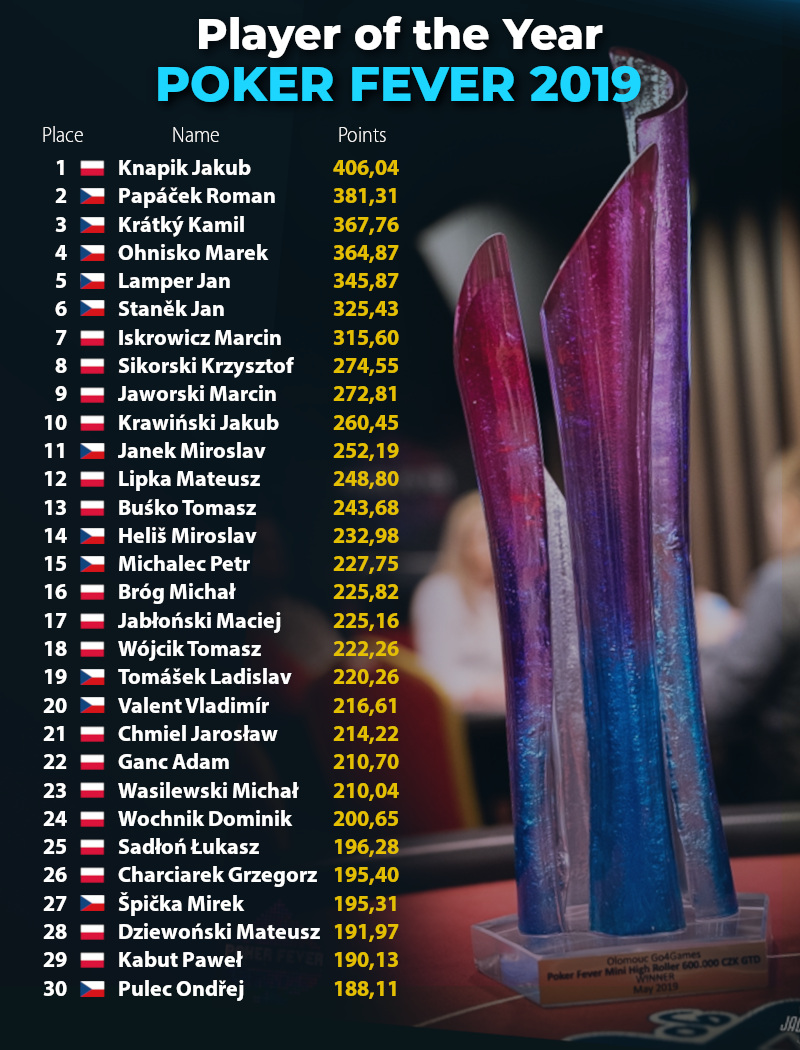 This is a yearly race in which you can win great prizes. The more points you get the higher in the ranking you are and the better things you can win.