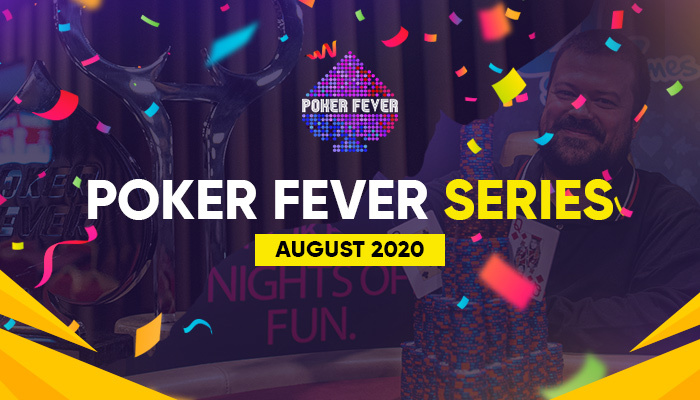 Monday, August 31, marked the end of the eleventh Poker Fever Series festival, which was held at the Go4games Casino Hodolany in Olomouc. Below you can find a summary of the most important tournaments.

The One-day Special event had a buy-in of CZK 1,500 and attracted 315 entries. CZK 500,000 was guaranteed in the prize pool, which means that there was a small overlay. 36 players got paid.

The One-day Special event conluded with an eigth-way deal. Czech player Petr Jasek has won the tournament and took home CZK 51,800. Among those who participated in the money deal there were two Polish players – Michał Marczyk finished 8th for CZK 25,600 and Adrian Skrzypiec finished 6th for CZK 29,500.

*Payouts after a deal.

Super High Roller was a CZK 30,000 buy-in tournament in which players started with 100,000 chips and levels were changing after every 30/40 minutes.

39 players came to play in the event and additionaly 16 re-entries were used. A total number of 55 entries generated prize pool of more than 1,5 million Czech koruna. Seven players were slated to be paid.

Horak started heads-up play with a slight lead over the best of Polish Super High Roller participants, Radosław Morawiec. The Pole, however, managed to win the match. In the last hand of the tournament Horak risked all of his chips with A8, Morawiec called with K3 and the board came 9-K-4-2-J.

The Main Event of the August Poker Fever Series festival had a buy-in of CZK 4,800 and a guaranteed prize pool of CZK 4,000,000. 819 entries were recorded, which means that there was a slight overlay. 80 players got paid and the eventual winner was supposed to take home the top prize of CZK 702,900.

In the final day of the tournament 24 players returned to the Go4games Casino Hodolany. Among them there were eleven Polish players. Łukasz Mazur from Poland started as the final day chip leader.

The finale table was composed of five Czechs, three Poles and one player from Slovakia. Daniel Dziuba from Poland was the first to bust and he took CZK 72,200. Szymon Bala finished 7th for CZK 125,600 and the last Polish player in the tournament, Mazur, took home CZK 160,000 after finishing in 6th place.

Main Event ended with a three-way ICM deal. Slovakian Marek Galbavy scooped CZK 521,600, Radek Machac took CZK 513,500, and Lukas Macura got CZK 429,700. The trophy went to Macura who has officially won the tournament after flipping blind with the two other remaining players.

*Payouts after a deal.

The next Poker Fever festival – Poker Fever Cup – is set to take place from September 24 to 27. The CZK 2,500 buy-in Poker Fever Cup Main Event provides a CZK 1,000,000 guaranteed prize pool. Online satellites take place every day on PartyPoker and you can qualify for as little as $5,50.