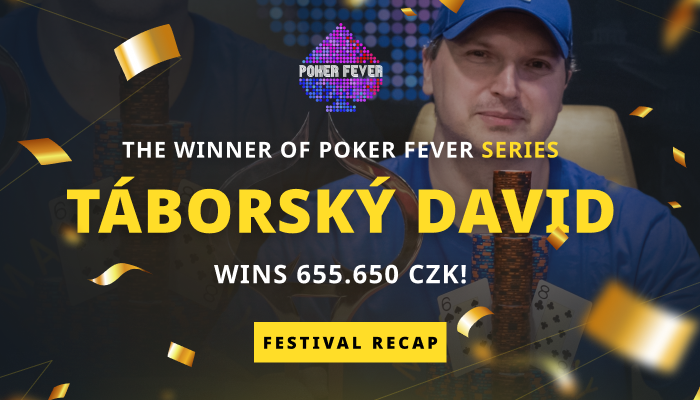 David Táborský from Czech Republic is the new Poker Fever Series Main Event champion. Who are the winners of JDPC, Super High Roller and High Roller? As july edition of the festival came to an end, let’s take a look at results of some of the most important tournaments.

The third and final day was played on Monday, August 2, when 24 players came to the Olomouc Go4games Casino Hodolany to compete for a trophy and a first-place prize of CZK 800,400.

The latest Poker Fever Series Main Event concluded with a two-way deal. David Táborský and Filip Hanusek – both from Czech Republic – took home CZK 655,650 each, while the trophy went to Táborský.

Wojciech Żmijewski was the best out of Polish players in the Main Event as he finished third for CZK 373.100.

The most expensive tournament was held on Wednesday, July 28. 34 players decided to compete in the Super High Roller event, which had a buy-in of CZK 30,000, and they were also responsible for 12 additional re-entries. Six best players were slated to be paid and players themselves decided to fund a buy-in back for the unfortunate bubble boy.

The two-day High Roller event attracted a total of 145 entries, which resulted in a prize pool of almost CZK 2,000,000. The money was shared among the top 15 finishers. Poland’s Marcin Kacprzak proved to be the best in the final day and scooped CZK 473,700. Another Polish player, Kamil Spaczyński, finished second for CZK 340,600.

During the first day of the Poker Fever Series festival players were able to compete in the annual Jack Daniels Poker Cup tournament. It had a buy-in of CZK 1,500 and drew a total of 356 entries. Cash prizes were given to those who finished in the top 35.

The event ended with a five-way deal and Petr Adamec from Czech Republic walked out as the official Jack Daniels Poker Cup winner. He took home a prize of CZK 64,100.

The next Poker Fever festival in Olomouc, Poker Fever Cup, is set to take place September 23 to 26.