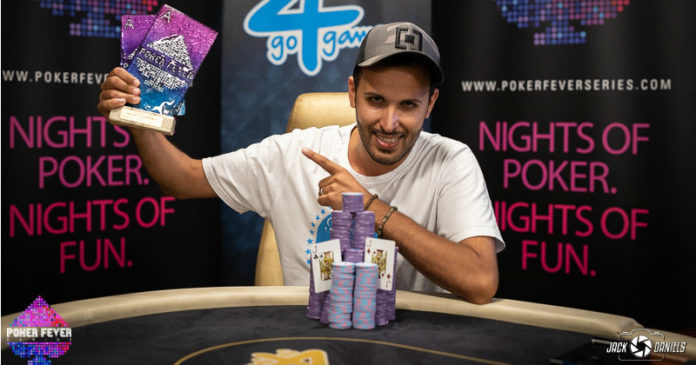 A very intense day of Poker Fever Series has reached its end. The High Roller event is in the books now and the final day of Poker Fever Cup has also been played. Its victor is a player from The Czech Republic, Milan Svacina (pictured above), while in the second spot we have Łukasz Sadłoń from Poland.

Poker Fever Cup is a tournament with CZK 2,500 buy-in and CZK 1,000,000 guaranteed. July edition of Poker Fever Series offered however a different structure for this tournament. Players started with 30,000 chips and blinds increased every 30 minutes. To get to the final day of the game one had to survive 16 blind levels in one of five starting flights.

Summary of the finals

We got to know the finalists late in the evening. Four players from Poland, four from The czech Republic and one from Denmark joined the battle for trophy and main prize. Right from the beginning Milan Svacina had advantage over his competitors.

Michał Placek was first to go from the final table, but he received CZK 25,400 as a consolation prize. Soon after Szymon Pawłowski risked his last chips with JT but was faced by aces held by Svacina. He got CZK 45,200 for the 7th spot and left the table.

When Zbynek Baros hit the rail in the 4th we knew it would be Svacina or one of two Polish players to win the event. Łukasz Sadłoń put up a very nice fight, while Grzegorz Reczko took a more cautious approach as his stack was a bit smaller.

Finally Reczko had to settle for the third place and CZK 112,400. He was eliminated when his A9 lost against Svacina’s JT (board gave him a straight). Thus we got to the heads-up to see who would win the Poker Fever Cup.

Sadłoń was a huge underdog at the very beginning as he was holding only 2 million chips while his opponent had 13M. After a while Łukasz decided to try his luck with T8s but he was against jacks and so the new Poker Fever Cup champ is now Svacina.

The results of Poker Fever Cup: