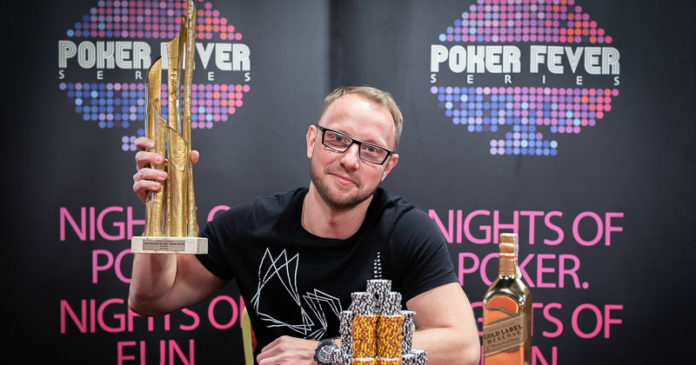 The most expensive tournament of July edition of Poker Fever Series is over. The new champion of Super High Roller which had a buy-in of CZK 30,000 is Czech Republic poker player Petr Svoboda, who scooped CZK 430,600 for his triumph. Second spot was taken by a Polish player Marcin Jaworski (CZK 301,400).

One day Super High Roller had a guaranteed prize pool of CZK 1,000,000. Players started with 100,000 chips, and blind elevels increased initially every 30 minutes. Late registration was available till the end of level 10. After it was finished we had complete information on the tournament statistics.

The most expensive Poker Fever Series event had 39 registrations (28+11 re-entries). Only four best could cash, but on the other hand the winner could grab as much as CZK 430,600.

The Super High Roller had players joining the tables from a few countries, but Marcin Jaworski was the only one from Poland who actually managed to get far enough to try to take the trophy back to his country. Unfortunately for him the game was dominated by players from The Czech Republic.

Jaworski’s opponent in the HU was Petr Svoboda. Czech Republic poker player who once won PokerStars Festival Rozvadov, and here played very aggressively, so that his opponent could not even out the chip difference.

In the very final hand of the tournament Jaworski decided to risk his event life with a pair of nines and rival called with A5. Flop brought an ace and it was all over. Apart from CZK 430,600 prize, the winner of Super High Roller also received a very beautiful trophy and a bottle of good alcohol.