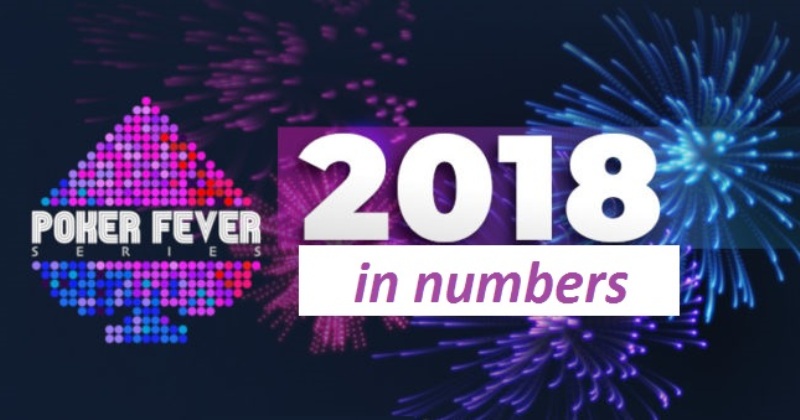 Poker Fever Series enters its third year. In a few days we will see each other at the first weekend CUP. Before that happens though let us go back in the past and see how the festival was doing in the previous twelve months.

In 2018 we met as many as nine times. Five times on the smaller festivals – in January, April, June and December – and four times on so called Big Fevers – in March, May, July and November. Eight of those Poker Fevers took place in the good old Go4Games Casino in Olomouc, and once, in May, in King’s Casino back in Rozvadov.

During the nine festivals we have played at least 84 tournaments. There were as many as 10,741 registrations as well as 4,140 re-entries, so altogether we have had 14,881 entries. All the numbers above symbolize players who contributed to a great Poker Fever success in 2018. A success worth…

This is how much we have got when we summed up all the buy-ins in all events. We were surprised ourselves when we sa how much it was. It’s more than 2.5 million dollars that players brought and that were given to those lucky and skilled enough to get to places paid in the PF events.

Online qualifiers available at PartyPoker have always been an inseparable part of Poker Fever. Thanks to them you can win your ticket to the Main Events, both CUPs and Series for a fraction of its value. In 2018 our satellites were so popular that at a certain moment we organized them daily. This translated very nicely into the number of tickets given away and so last year at Party you got from us as many as…

The number takes into consideration both the qualifiers to weekend events as well as 9-day long festivals known as Poker Fever Series. If we consider that satellites to January and March events are already on and that we play seven days a week we can expect 2019 to be even more generous for our players than the previous year!

In the table below you can see a compilation of the players who were very skilled and won a major event.

Feel free to take a look at the infographics that will present all the data in a clearer way.

Third year of Poker Fever brand will kick off officially on January 24th. On that day players will come to Olomouc for Poker Fever CUP. First Poker Fever Series on the other hand will start March 4th. It’s worth noting that one day will be missing from the schedule and there will be some other changes as well to make the action even faster. Follow our website to find out more about the PFS!

Satellites to both events are available already at PartyPoker. You can play them seven days a week. We encourage you to join us and good luck in 2019 during all the tournaments Poker Fever has for you!

If you do not have an account at PartyPoker yet then create it using this link and enjoy all the benefits the room offers.