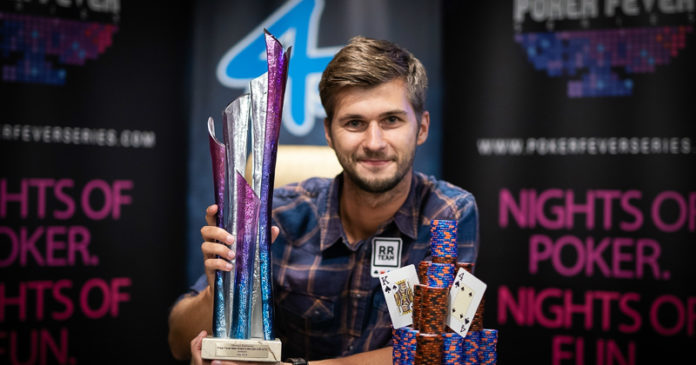 Mateusz Dziewoński won the Main Event that took place during the 9th edition of Poker Fever Series. As the main prize he received CZK 830,800 and a prestiguous trophy. Before him only one Polish poker player managed to win PFS – it was Jakub Chludziński.

Polish players had to wait two years for a new Poker Fever Series champion. Back in August 2017 the Main Event was won by Jakub Chludziński, and since then no one from Poland has been able to perform like that. Now, after 8 festivals the title is back in Poland.

All thanks to Mateusz Dziewoński, who absolutely dominated the Main Event at the 9th edition of PFS. Beforehand this player has been very successful, for instance winning the Main Event at WSOP Circuit Rozvadov 2015. This time he collected CZK 830,800 for his victory, which amounts to about $35,000.

After day 2 that took place on Sunday we had 23 players left in the game. 16 from Poland and 7 from The Czech Republic. When the final day kicked off the chip leader was Jaroslav Kovarik, and second biggest stack belonged to Łukasz Sadłoń.

In the 17th we said goodbye to Ludek Safranek. Soon after him another Pole hit the rail. Paweł Kabut collected CZK 42,700 for his performance, just like Safranek.

Natalia Strzałek (pictured below), who was very close to being the first woman at Poker Fever Series ME final table was eliminated in the 11th spot. She received CZK 69,100. The same was meant for bubble boy at FT, Tomas Kollar. 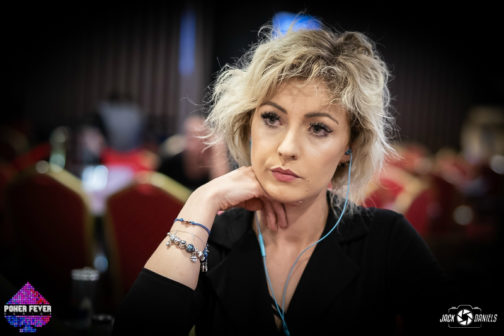 Stacks before the final table:

First to go on the nine was Łukasz Dziug, who put his QJ gainst Daniel Orłowski’s K7. Łukasz left the table CZK 81,400 richer, and afterwards another player from Poland hit the rail. Piotr Marzejon, lost his stack to Dziewoński and he went on to collect CZK 94,600 for the 8th spot

Fifth spot was taken by a mysterious “SNK”, who cashed CZK 198,000. Ony four players were left in the game and the biggest stack was Orłowski. Talking about making some sort of a deal did not go well and so the players were left fighting for CZK 830,800 main prize and the trophy.

Dziewoński on his way to victory

In one of the key hands at this stage Dziewoński doubled his stack thanks to Orłowski when he won with QQ against TT. Later Sadłoń gave his stack away to Roman Rychlik. He collected CZK 272,800 for the 4th place in the tournament.

When the game was 3-way the pace went down a bit. Then Dziewoński eliminated Orłowski in a hand where his AJ lost to 44. Orłowski had to settle for the 3rd spot and CZK 374,000.

At the beginning of the heads-up between Dziewoński and Rychlik the latter had an advantage. Polish WSOP Circuit champion did not intend to give up however and he soon turned the tables.

In the last hand of PFS Main Event Rychlik risked all his remaining chips with 96. Dziewoński called with K4, that is the hand he won WSOP Circuit Main Event with(!!!). Board sent all he chips his way and allowed him to succeed at Poker Fever Series! Congratulations