On Monday we start yet another Poker Fever Series festival in Olomouc and Rafal „Jack Daniels” Gladysz will be there to report all the action for you!

The afore-mentioned is the editorial chief of PokerTexas and his reports are always very popular among poker fans. Just last year his content created on the basis of our PF Series & Cups had 180,000 hits. This is not a small number and it certainly proves the quality of his broadcast.

During his last visit in Olomouc Jack Daniels decided to get closer to his readers than ever before and apart from observing and reporting the games he prepared some materials straight from Go4Games Casino in Olomoucw Ołomuńcu. We hope for some of that this time as well!

This time the March edition of Poker Fever Series will take place between 12th and 20th of the month. Many popular players from Poland and the Check Republic have already announced their arrival, so a trip to Olomouc should be definitely on the list to consider.

Here is the full schedule. As you can see our players will have plenty of events to chose from. 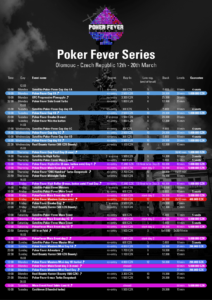 Below some useful links that may encourage you to join us and play some poker.

We hope you will join us soon in Go4Games. You can follow the reporting we mentioned beforehand at Pokertexas and PokerGround. PokerTexas fanpage at FB will also offer you contests with some interesting prizes to win.